Diana Lary is professor emerita of History at the University of British Columbia. She has written extensively on Modern Chinese History and on the History of Migration. She was once the Resident Sinologist at the Canadian Embassy in Beijing. 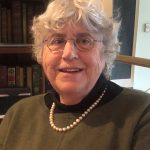