There are many challenges, both actual and emerging, which threaten the future of our democratic, market-based systems and indeed the future of mankind itself. Our economic, political, environmental, and public health systems are all showing increased signs of stress and any one of them might “stop” or fall into crisis. The failure of even one system would be serious enough in itself. However, since these systems are intimately interrelated, problems that emerge in one system could trigger crises in the other systems as well. This paper begins by describing the challenging path we are already on. Rising debt levels threaten economic and financial stability; rising inequality threatens political instability; and rising stocks of greenhouse gases threaten climate and environmental instability. The paper proceeds to describe the key characteristics of more sustainable systems, and then suggests specific policies that might be required to move us from “where we are going” to “where we want to go”. The paper concludes with a brief discussion of the political difficulties, both national and international, that will have to be overcome to ensure that the required policy changes are actually implemented. While there are some grounds for optimism, the importance of these political issues should not be underestimated.

NB: This brief was originally published by the Council on Economic Policies in April 2021: https://www.cepweb.org/if-something-cannot-go-on-forever-it-will-stop/

William (Bill) White is currently a Senior Fellow at the C.D. Howe Institute in Toronto. From 2009 until March 2018, he served as Chair of the Economic and Development Review Committee at the OECD in Paris. Prior to that, he spent fourteen years as Economic Adviser at the Bank for International Settlements (BIS) in Basel. In that role he was responsible for all BIS research, data collection, and the organization of meetings for central bankers from around the world. Before joining the BIS in 1994, he was the Deputy Governor responsible for international affairs at the Bank of Canada in Ottawa. In 2016, he was awarded the Adam Smith Award, the highest award of the National Association of Business Economists in Washington. 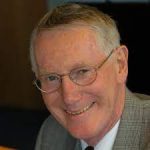