How Populism Threatens Liberal Democracy Around The World And What Canada Should Do About It
Published: 2020 | Volume 68, No. 2

Michael Petrou takes stock of the current state of the global international order, the status of global populist movements, and the impact populism exerts at the start of a new decade. He goes on to examine why Canada should care about the weakening of global democracy, and what it can do to combat rising populist tides.

Michael Petrou is a historian and journalist. He is fellow-in-residence in Carleton University’s Bachelor ofGlobal and International Studies program, where he teaches a course on democracy and political freedom in the Middle East, and an adjunct professor in the Department of History. He also teaches a course on journalism and conflict for the School of Journalism. In 2017-18, Petrou was the Martin Wise Goodman Canadian Nieman Fellow at Harvard University. He is a longtime foreign correspondent who has reported from across the Middle East, Europe, and Central Asia. He won the 2017 R. James Travers Foreign Corresponding Fellowship, which he used to report on Syrian refugees in the Middle East. Petrou has won three National Magazine Awards and been shortlisted for six more. Petrou’s book, Is This Your First War? Travels Through the Post-9/11 Islamic World, won the Ottawa Book Award. He is also the author of Renegades: Canadians in the Spanish Civil War. He has a doctorate in modern history from the University of Oxford, which he attended as a Chevening Scholar. 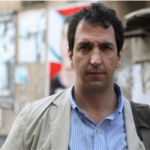