Former Ambassador and CIC Distinguished Fellow, Mokhtar Lamani, will participate in the launch of two studies on the constitution and elections in Syria. The studies are part of the framework of the National Agenda for the Future of Syria Programme (NAFS), developed and implemented by the United Nations’ Economic and Social Commission for Western Asia (UN ESCWA).

One of the main activities of the NAFS Programme, given its objective to assist in a post-conflict recovery and reconstruction period in Syria that promotes reconciliation and reflects the needs and priorities of a broad range of Syrian people, is to provide substantive support and input to ongoing international negotiations on Syria’s future. Within this context, the NAFS Programme prepared two important studies “Constitutional Options for Syria” and “Future Elections in Syria”. These studies are the result of hours and days of discussions between key Syrian experts and stakeholders, and the paper on elections was produced in partnership with the International Institute for Democracy and Electoral Assistance.

The objective of the meeting, to be held in Beirut, Lebanon on 12 February 2018, is to launch the studies and discuss their findings. Check out the agenda.

Press interested in speaking to the Ambassador about the event should direct inquiries to Andrew Koltun at media@thecic.org.

Mr Mokhtar Lamani is a Senior Fellow at the University of Ottawa. He was the Head of the Office of the UN-League of Arab States Joint Special Representative for Syria in Damascus from September 2012 to May 2014. Before his appointment in OJSRS-D, Mr. Lamani was the Senior Visiting Fellow at the Centre for International Governance Innovation (CIGI) in Canada.

Previously, he served as Ambassador Special Representative of the Arab League in Iraq, appointed by the Arab Summit in 2006. On behalf of the Arab League, he worked to reconcile fractious parties and sectarian groups in Iraq while building peaceful relations between Iraq and neighboring countries.

Prior to his position as Special Representative, Mr. Lamani served as Ambassador of the Organization of the Islamic Cooperation to the United Nations in New York from 1998 to 2004.
His distinguished career in international diplomacy includes a number of positions with the General Secretariat of the Arab League, including Deputy Permanent Observer to the UN, Officer in Charge of the Iraq-Kuwait dispute, Coordinator of Secretariat Reform, and Coordinator of the Euro-Arab Dialogue and Afro-Arab Cooperation, Responsible of European relations. 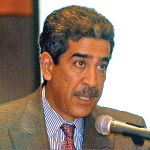