The world’s newest country, South Sudan, is also the least electrified. A period of growth that began after a 2005 peace deal and continued after independence in 2011, saw billions of dollars in oil revenue and strong international support. This period was powered by diesel generators and little long-term electricity infrastructure was created. A new civil war that began in late 2013 has stymied all growth and led to economic collapse, triggering a massive multibillion-dollar international humanitarian response. Switching from diesel to renewable energy in these operations could unlock a host of benefits, both near-term and longer-term. This report argues for a donor-led transition to renewable energy to power humanitarian efforts across South Sudan and offers recommendations on how to achieve it.

Renewable energy offers great potential as a climate-sensitive strategy for energy generation and a potential tool for peace building in conflict-risk, climate-vulnerable and energy-poor settings like South Sudan. International peacekeeping and humanitarian responses are overwhelmingly powered by dirty and expensive diesel fuel in some of the least electrified countries in the world. Similar dynamics to what we describe in South Sudan – ongoing conflict or conflict-risk; low levels of electrification, dependence on fossil fuel imports; and reliance on diesel by the sizeable international field operations deployed in country – also exist in many other settings. These international missions offer excellent entry points to introduce new renewable energy development into fragile settings. 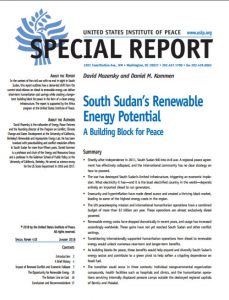 David Mozersky is the co-founder of Energy Peace Partners. He has been involved in peace building and conflict prevention work since 2001, with a specific interest in mediation and peace processes.
He is the Founding Director of the Program on Conflict, Climate Change and Green Development at UC Berkeley’s RAEL, and has previously worked with the International Crisis Group, the African Union, and Humanity United, among others.