Under Vladimir Putin, Russia has engaged in reckless expansionism. Unlike the irredentism evident in seizures of territory in Georgia or Moldova, however, the 2014 invasions of Crimea and the Donbass region of Ukraine went further than the Soviet Union’s own record since the Second World War. By annexing the territory it had conquered, Russia put an end to almost seventy years in which the UN system had largely prevented forced annexation. From the Soviet invasion of Afghanistan to the US invasion of Iraq, other military adventures were eventually met by a restoration of sovereignty. Putin tramples over these longstanding norms of international relations because the expansion of territory reinforces Russia’s internal cohesion and demonstrates “success” on the international stage. These benefits outweigh the great hardships and diminished economic prospects this destabilizing behaviour provokes.

Chris Alexander has served as a Canadian diplomat for over eighteen years, working in the Canadian embassy in Moscow under Yeltsin and Putin. He was the MP for Ajax-Pickering from 2011 to 2015, serving as Parliamentary Secretary for National Defence and Canada’s Minister of Citizenship and Immigration. In the latter capacity, he was responsible for introducing Express Entry, updating the Citizenship Act for the first time in a generation, making the first commitment by any country to resettle 10,000 Syrian refugees, and sustaining the then highest levels of immigration in Canadian history. He has been named a Young Global Leader by the World Economic Forum and one of Canada’s Top Forty Under Forty. 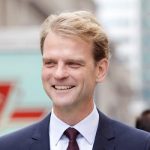