Canada In The Arctic 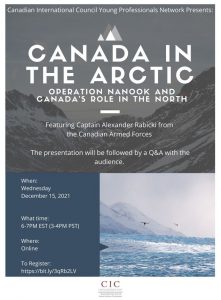 Canada is often referred to as an Arctic country, but what does it mean to be a northern nation? Recent history has shown states such as Russia, China, and the United States bolster their presence in the Arctic, Canada must continually strengthen its knowledge, partnerships, and ability to operate in an often challenging artic environment.

To help us understand Canada’s presence in the north and Canadian Arctic sovereignty, the CIC Young Professionals Network will be joined by Captain Alexander Rabicki from the Canadian Armed Forces who will discuss Operation Nanook, Canada’s signature northern operation designed to exercise the defence of Canada and to secure our northern regions and Canada’s role in the North.

The presentation will be followed by a Q&A with the audience.